Jean-Michel Basquiat rose to fame in the early 1980s, he was 21. He was young, bold, and on his way to becoming one of the most famous artists of his time.

Basquiat wouldn't live far past his youth as history would have it, but his prestigious work still lives on and is seen as some of the most valuable and essential pieces in modern art.

Aside from creating paintings that infused the social commentary of the time with curious abstract figures and wild use of color, he forged a path that allowed young creators to have an impact.

Fast forward to our current decade, and you'll see a forceful reemergence of youth in the art scene. This time, however, instead of 1-of-1 paintings on a canvas, young artists are making waves with NFTs.

While many of these creators still aren't old enough to buy a lottery ticket, they are hitting the jackpot by raking in millions of dollars in NFT sales and amassing large and loyal followings that boost their hype.

Young NFT artists you should know

While all of these young creators come from different backgrounds, each one has a different story, and they all are creating a name for themselves in the NFT space. What makes these prodigies even more impressive is that while many are earning absorbent amounts of money from selling non-fungible tokens, the spotlight has not jaded their youthful spirits.

This initial wave of young artists opened the doors for other creators to test the NFT waters. With that in mind, here are a few notable youths who've caught fire early in the metaverse and become household names for NFT enthusiasts.

Victor Langlois – who goes by FEWOCiOUS – is already a millionaire at 19. Both his physical and digital art is in such high demand that Christie's auction house's website crashed when FEWOCiOUS's pieces went live to bidders.

FEWOCiOUS grew up in the digital age and was able to carve his space out in NFTs with loud, abstract pieces that ultimately tell a story of FEWOCiOUS's complicated childhood and gender transition.

One of his most well-known collections to date, titled Hello, i'm Victor (FEWOCiOUS) and This is My Life, is a 5-piece mix of both digital and physical art. The collection is almost disturbing in its vividness and evokes the honest feelings behind the chaos in FEWOCiOUS's life. The beautiful honesty behind the projects is part of what makes them desirable and why the collection sold for over $2 million.

FEWOCiOUS has a beautiful story that's still in the making, but the sky is the limit for this young talent. Plus, rooting for his success is easy, as a quick scroll down his Twitter feed highlights the joy and happiness he exudes from creating.

artists dedicate their life to translating feelings to their canvas

its so much more than the paint you are looking at,
its the conversations that are happening
a new realization you had
a lesson the artist learned
a connection

ahhhhh. art is so important

From being a 2021 Future 50 award winner to receiving the first-ever Time artist in residence, Nyla Hayes already has a long list of impressive accolades at just 13 years old. Her signature collection Long Neckie Ladies is among her accomplishments, which generated over $4 million in sales so far.

Setting aside the insane earnings that a 13-year-old has made from selling digital artwork, Nyla Hayes created the first female-led ALL WOMEN generative art project with Long Neckie Ladies. In a space currently dominated mainly by men, this accomplishment is extraordinary for an artist of any age, let alone one on the cusp of entering high school.

Part of what makes Nyla's story even more charming is the childhood innocence behind her inspiration. As she mentions in her bio, a big part of her inspiration comes from her love of dinosaurs. Taking her favorite dino (brontosaurus) and combining that silhouette with a diverse collection of women is how Nyla produced a stunning collection that's floor price is still rising.

It's safe to say that her career as an influential artist is still in its infancy (pun mostly intended), and while this is #NFA, her NFTs could prove to be a wise investment for art collectors looking for a new project.

Emilio is 7 years old. SEVEN. But age is just a number, right?

At the time of writing this, Emilio is selling his work on almost all major NFT marketplaces and has already earned over Ξ27 on OpenSea alone. While his earnings are still "modest" compared to other artists on this list, serious NFT collectors still have their eyes on Emilio's work.

Speaking of collectors, the young creator also sports a Woodies PFP on his Twitter account, indicating some investment savviness to go along with his blooming talent. Combined with his derivative creations that play off major collections like BAYC and Long Neckie Ladies add to Emilio's allure in the NFT space.

Emilio's work is more than just a fun story with a child artist at the center of it; it's also a case study in the possibilities that the metaverse offers to all ages. It'll be fascinating to see how Emilio develops his raw talent as he matures and what he plans to offer up next to an eagerly awaiting NFT community.

Emilio has been telling people “I am an artist” since he was 5 years old and people normally giggle. When he told the #NFTcommunity “I am an artist” YOU embraced, encouraged, and empowered. Thank you!🙏🏼❤️🙏🏼#NFTartist #NFTlove #2021 pic.twitter.com/KmPbtGEWuK

In May of 2021, Yasmeen launched her first highly successful NFT project, #NFTeacups, which gained widespread recognition among digital creators. Now, at just 13 years old, Yasmeen has two successful collections, a growing following in the NFT and VR communities, and an NFT influencer with a global audience.

Yasmeen is talented beyond her years, but maybe what's most impressive is how much thought and planning goes into her collections. For example, with her hit collection ELVEN, the 6,000 randomly generated elven girls are composed of her hand-drawn traits, and Yasmeen was clever enough to describe the project roadmap as a journey that buyers get to participate in upon purchasing one of these artistic elven creations. 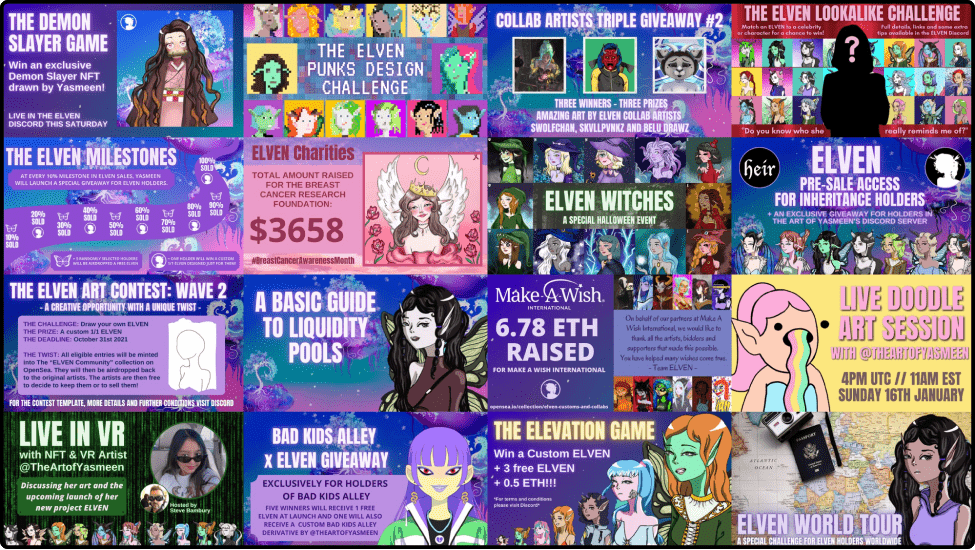 Yasmeen's projects haven't gone unnoticed by other noteworthy artists either. The young creator has a long list of collaborations, including live art sessions with Doodles, raising money for the Make A Wish foundation, fun derivative collabs, and charity-centered drops.

There’s no denying that there’s an excitement that’s building around her projects. Plus, Elven is a goldmine for the collectors out there who love projects with a low floor price and huge potential.

As the name implies, Three Sisters Creationzᴺᶠᵀ isn't just one young artist but a family of them. While the parents play a part in generating the NFTs, Estelle, Izzy, and Violet are primarily responsible for creating the digital and physical artwork.

The three sisters are between the ages of 10 and 13 and have released a handful of collections available on OpenSea. While they haven't stacked major ETH yet, there is a high ceiling for potential success.

Scrolling through their work and down their Twitter profile shows that the art this family produces together is not about getting rich quickly. On the contrary, it's about sharing a passion and the results with the NFT community.

In any case, It'll be fun to see how far this family-run NFT project can go. It's not out of the realm of possibility that one day Three Sisters Creationzᴺᶠᵀ starts seeing the floor price on their projects going up and to the right.

The future is bright

Gen Z was born digitally native, and all subsequent generations will be the same. This type of technological fluency that older generations will likely never fully grasp will be a catalyst for young creators to excel with NFTs.

Additionally, as the space continues to grow and evolve, it's a near certainty that we'll soon be seeing more young artists emerge on the scene with incredible projects. Now, it's just a matter of waiting to see which young phenom is the next big thing in the MetaVerse. 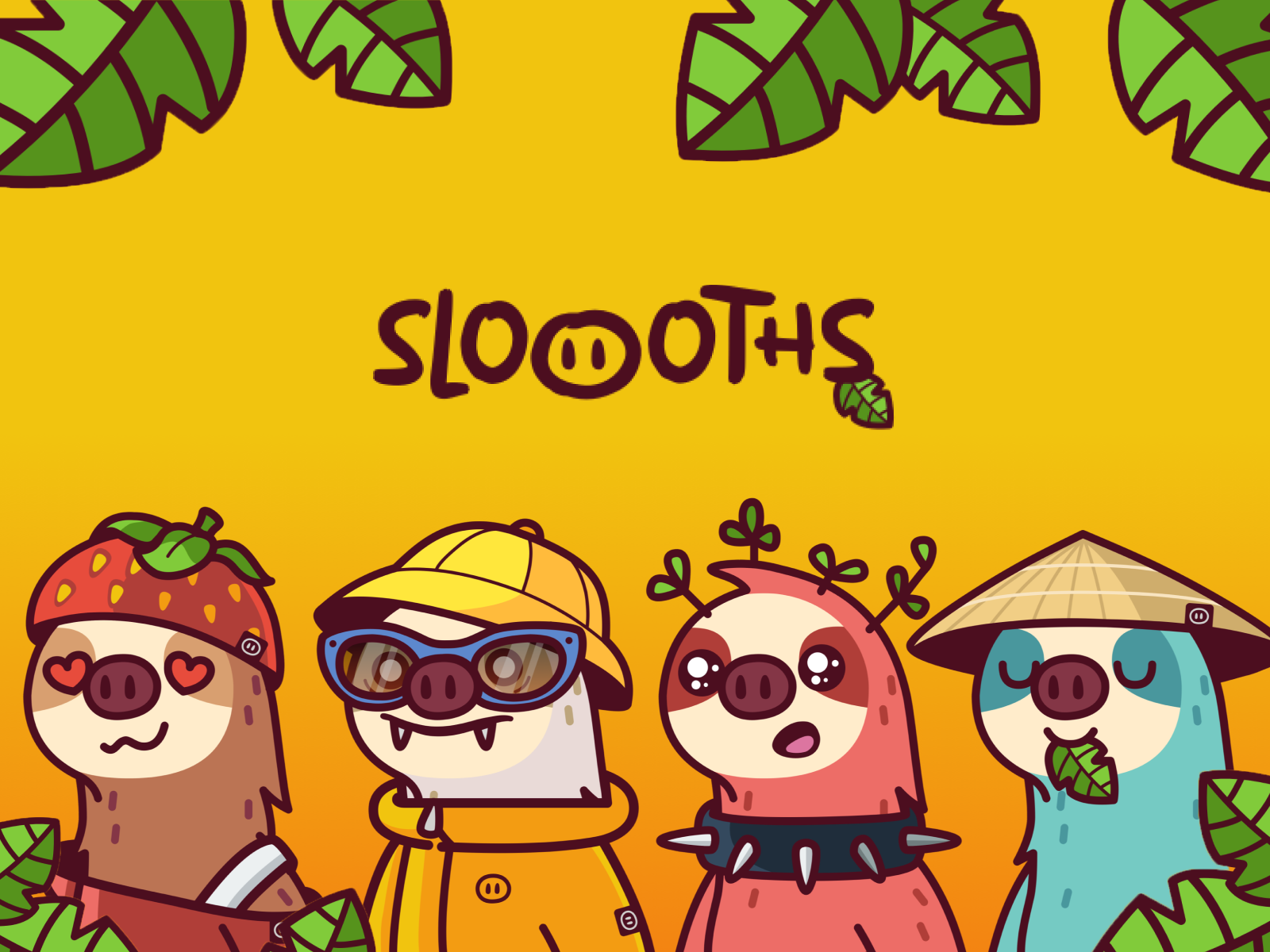